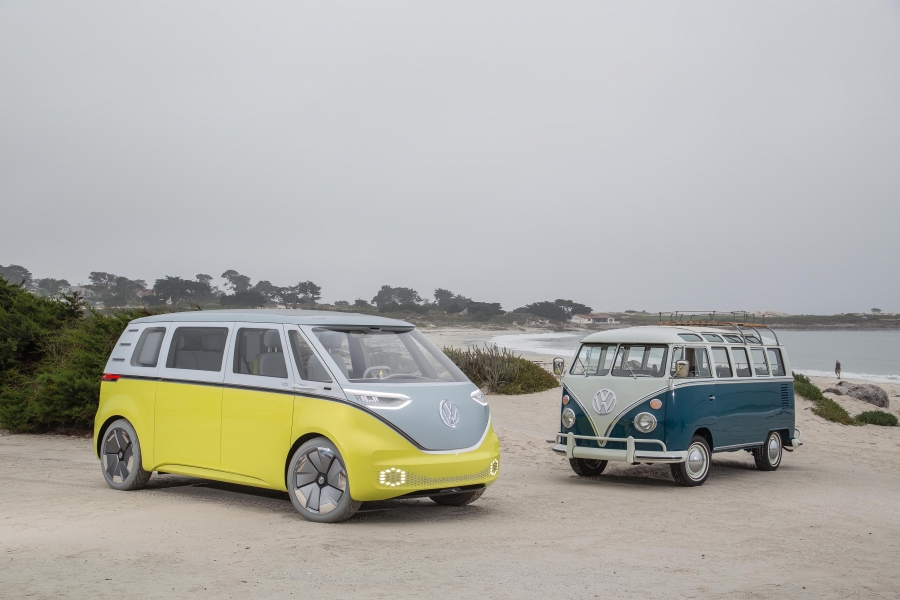 The German carmaker is accompanying the launch of the ID.Buzz, its new electric Combi, with an exhibition of its elders. An opportunity to relive a saga that began more than 70 years ago.

An icon reinvent itself

The Combi is immortal. At over 70 years of age, here it is now being reinvented as an electric vehicle. Considered the first zero-emission multipurpose vehicle on the market, the ID. Buzz can be seen as a modern interpretation of the Combi. A story that began in the aftermath of the Second World War and shows that quite often, it is the simplest ideas that prevail.

The Volkswagen Combi, which would become the iconic recreational vehicle of the post-war “Glorious Thirty” period, was inspired by the "Plattenwagen", a small vehicle built to transport heavy pallets in the Wolfsburg factory. The Dutch VW importer Ben Pon is credited with its creation. He discovered the commercial vehicle during a factory visit in April 1947, and sketched out a design for a passenger vehicle with a steering wheel at the front and an engine at the rear. He was so sure of his discovery that he persuaded Heinrich Nordhoff, the VW boss, to build a prototype that hit the road in November 1949.

The rest is history. Nicknamed Bulli by the Wolfsburg employees due to the resemblance of the front end to a bulldog, but also dubbed the Transporter, the Combi went into production on 8 March 1950, at a rate of ten units per day. This versatile vehicle could seat up to eight people in a very well-lit interior, and could also be adapted to carry loads. To save money, it adopted the Beetle’s axles and its 1.2-litre air-cooled 4-cylinder engine that delivered 70 horsepower in its most powerful version. Over the decades, the Combi or Transporter continued to reinvent itself to the delight of its fans. It would form the basis for a multitude of versions and special car bodies. Some models would even become the darling of the new travellers who have embraced Vanlife. This year's Rétromobile will give pride of place to this movement, which is experiencing unprecedented popularity.