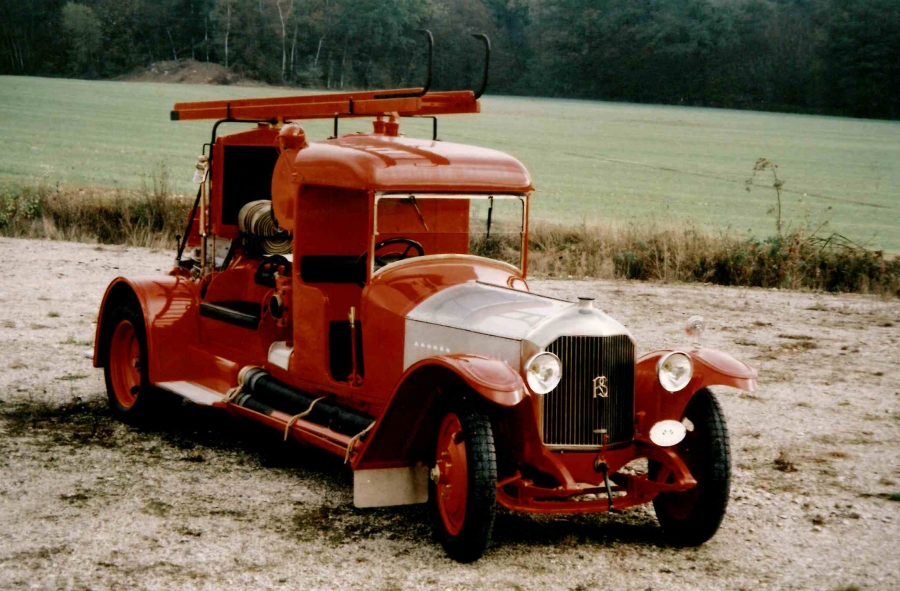 The Berliet Foundation will celebrate its 40th anniversary at Rétromobile by spotlighting Lyon's automotive industry. A rare 1921 6 cylinder Rochet-Schneider 18400 series with Delahaye firefighting equipment serves as a reminder that Edouard Rochet and Théodore Schneider were pioneers of the automobile.

The model presented at the show, 197 of which were produced between 1920 and 1926, belongs to the 18,400 series approved by the Service des Mines on 2 October 1919. Acquired by the Chocolaterie Menier in 1921, it has 40,830 km on the clock. For nearly 60 years, it provided fire-fighting services to the factory and the town of Noisiel, which had essentially shared destinies.

In 2004, this vehicle was donated to the Berliet Foundation by Nestlé-France S.A.S, "on the one hand because of its brand, and on the other because of the parallelism between the two industrial and human adventures of the Berliet and Menier companies".

Created by Edouard Rochet and Théodore Schneider in Lyon, Rochet-Schneider achieved remarkable feats in the late 19th century:  in 1896, it climbed the Galibier Pass (2,645 m.); in 1898, it drove from Lyon to Constantinople without an incident, and won many racing honours. 1900 saw the inauguration of a 10,000 sqm factory, at the time, the showpiece of the “Lyon automotive school”. Solidity, reliability, "haute-couture" manufacture and finishing: such are the values of the brand whose car production ceased in 1931 and that of heavy commercial vehicles twenty years later.

A SHORT HISTORY OF ROCHET-SCHNEIDER

Edouard Rochet (1867-1945), a cycle manufacturer from Lyon, and Théodore Schneider (1862-1950), a motor sports enthusiast, joined forces in Lyon in 1889 and succumbed to the lure of automobile construction in 1894, the year in which they produced their first car with a single-cylinder engine, belt drive, reversible handlebar steering and wooden cart wheels. In 1895, two new versions were produced, one with bicycle wheels and “balloon” tyres, the second one weighing no more than 650 kg.

At Whitsun 1896, the two associated ascended the Galibier Pass in the Alps, (2,645 m), a feat which earned them considerable fame. In 1898, Démétrius and Georges Zafiropoulo successfully made the journey from Lyon to Constantinople without incident. The car then enjoyed multiple successes in motor races.

The workshops in Rue Paul Bert, which had become cramped, produced 120 cars in 1898-99. In 1900, the ultra-modern 10,000 m2 factory was inaugurated on Chemin Feuillat. It produced cars with vertical 2 and 4 cylinder engines from 8 to 40 hp, cardan transmission, while manufacturing licences were purchased by Switzerland, Italy and Belgium. The facility made 250 cars with a workforce of 250 in 1904/1905. The business prospered very quickly.

On the initiative of the Zafiropoulo brothers, who were shareholders, and despite the reluctance of the two founders, the French company was wound down and transferred to a company under English law, "La Rochet-Schneider Ltd", with a 500-franc share in the Lyon company being exchanged for 2,593 francs... but production fell to 140 units in 1908. The British interlude ended the same year, but the momentum had been interrupted: in 1910, Théodore Schneider left to found his own company in Besançon and Edouard Rochet left his position as managing director, although he remained in the company.

Commercial vehicles in the frontline

Under the management of François Baverey1, the business bounced back: 900 cars produced in 1913 with a workforce of 600 employees. Even the French President drove a Rochet-Schneider convertible! During the First World War, Rochet-Schneider produced 1,400 1.5 tonne trucks and 3 million shells for the army. Once peace was restored, "the Lyon Rolls-Royce" returned to manufacturing top-of-the-range cars that impoverished customers could not afford, and made shifted its focus to manufacturing commercial vehicles. The 29 500 series (24 hp) of 1929 was the last car model. Over the years, the well-reputed commercial vehicle range was expanded and, from 1932, a heavy oil engine was offered under an Oberhänsli licence.

After the Second World War, the factory resumed the manufacture of coaches and buses, and in 1948 the “chassis-poutre” came out. In 1952, Rochet-Schneider was removed from the manufacturers' directory. Its two declared activities became subcontracting work and the rental of premises. Automobiles M. Berliet gradually rented out the whole complex. At the request of the shareholders, he acquired the company in December 1959, and set up his spare parts department. In 2002, Renault Trucks sold the land and property to the Greater Lyon Council. Today, it is a large education and training campus whose new buildings bring to mind the industrial character of the original activity.

1 Inventor of the Zenith auxiliary jet carburettor – In December 1906, agreements were signed between Rochet-Schneider and F. Baverey for the exploitation of the latter’s patents. In 1909, establishment of the Société du Carburateur Zénith, on Chemin Feuillat, Lyon, 88% owned by Rochet-Schneider.