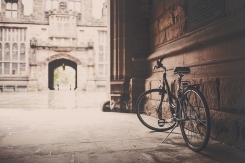 Come by Bicycle at Retromobile

A different way to get to Retromobile exhibition

In addition to the 200 km bicycle paths, 70 km of bus lanes are accessible to bicycles In Paris.

From the other side of the Boulevard, there are places to put bicycles along the cycle way. The parking for bicycles at the exposition park is not accessible due to the terrorist alert.

View the Vélib stations on a plan.

In the context of the national security plan "Vigipirate", you will be controlled at the entrance . The access to the exhibition could be refused to anyone refuses to submit himself to this security measure.