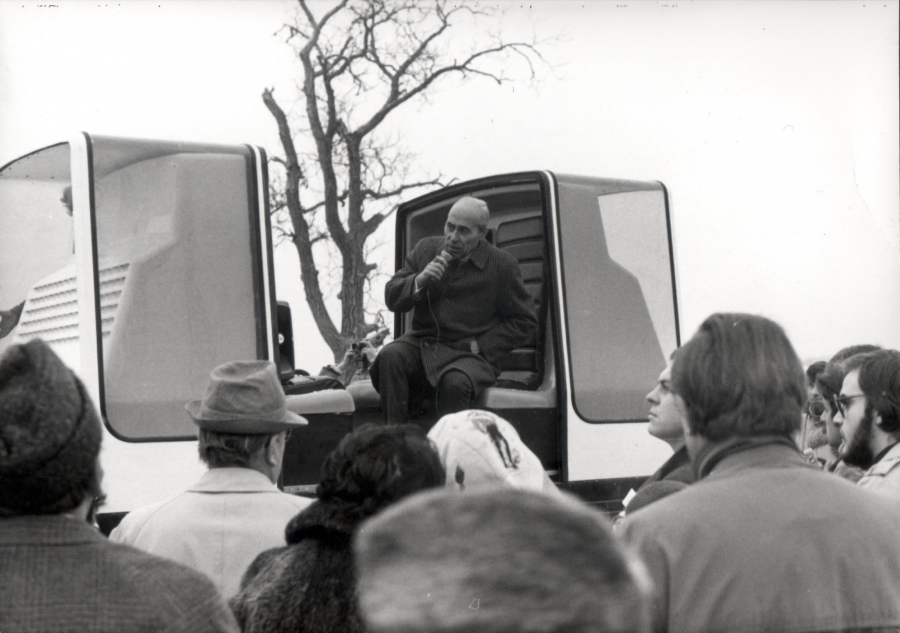 Presentation of TRIDIM at Retromobile

“I wonder if, rather than being from today, you’re not actually from the future, and by that I mean terribly ahead of your time…”

In October 1973, Jean Bertin declared: “The overpopulation of cities and the fight against air pollution has highlighted the need to create rapid means of public transport with non-intrusive infrastructure to dissuade individuals from using their automobiles. Current means of transport appear, most of the time, to be ageing and ill-suited to fulfil the policy of clearing the congested streets of cities.”

It was with this philosophy that, 50 years ago,  the engineer Jean Bertin and his team designed the concept of a light, simple, economical and fully automatic public transport vehicle: the TRIDIM. The prototype, presented in the form of a small cabin made from aluminium and composite materials, holds four passengers. This small vehicle is entirely automatic and travels at speed along a narrow track with an insignificant construction cost and at zero maintenance cost, since the TRIDIM floats on an air cushion and is never in contact with the track. It is driven by two electric motors.

It was christened TRIDIM because it was efficient in three dimensions: fast in terms of journey times, effective in traffic since it could travel on gradients of up to 20%, and very mobile on winding routes. The TRIDIM had a bright future ahead of it because it was fast, economical, silent and eco-friendly. It had been planned to build a version comprising three or four coupled coaches, accommodating around hundred passengers. At the time, Jean Bertin’s grand projects, of which the best-known was the Aerotrain, were supported by President Georges Pompidou, the two men sharing the same perception of a futuristic ideal. Fate would decide otherwise. The death of Georges Pompidou in 1974 and the arrival of Giscard d’Estaing at the head of the country led to the demise of these major projects. This episode proved fatal to Jean Bertin who, suffering from both moral and physical exhaustion, died a year later himself.

In February next year, the small team from the society L’Association des Amis de Jean Bertin, who for many years have continued to preserve this acutely contemporary heritage, will present the TRIDIM prototype in a live demonstration on air cushions, which will travel on a 20 m track built inside Rétromobile itself. Having recovered it in the state of a wreck in 1998, the society’s volunteers fully restored this prototype. Today, its look and its colours make TRIDIM an icon of the 1970s.

In this display, visitors will be able to discover the works and solutions proposed by Jean Bertin on the depollution the air in large cities and depollution of the oceans. His ideas remained unimplemented, as they were deemed too avant-garde at the time.