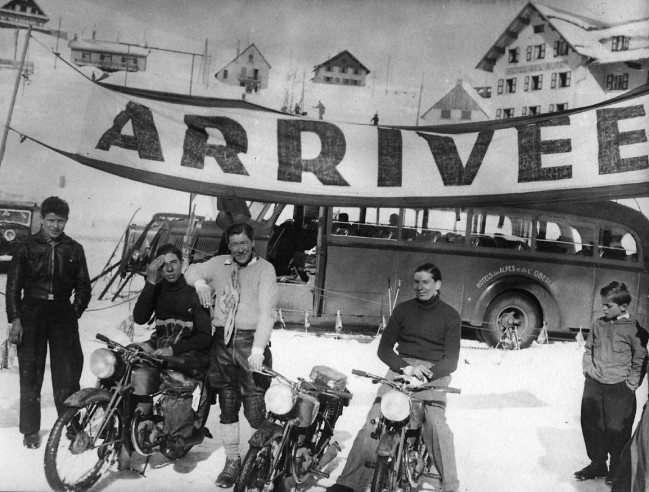 Three guys on their tobecs

On 5 February 2020, Igor Biétry, Jean-Claude Amilhat, Thierry Dubois and their supporters will be setting off on a great adventure: they’re going to travel from Paris to Alpes d’Huez on three Motobecane D45s. Their way of celebrating the incredible performance of Georges Monneret and his sons Pierre and Jean in 1948.

Back then, the challenge was to travel from Paris to Alpe-d’Huez – a distance of 670 km – in less time than it took the train or the coach, i.e. under 15 and a half hours. At midnight on Saturday 31 January, the ultra-famous boxer Marcel Cerdan – a great friend of Georges – set the trio off in front of the Le Terminus brasserie at the Porte d’Orléans. The crowds were there in force, together with all the daily press, which went on to cover their feat. As a publicity stunt, it was huge! And they pretty much succeeded: they got to Alpe d’Huez 13 hours and 45 minutes later on their three Motobecane D45s with an average fuel consumption of 2.5 L per 100 km.

The Motoconfort C45 (Motobecane D45) was a moped built by the French manufacturer Motobécane - Motoconfort. Drawing inspiration from the pre-war 100 cm³ AB1, this model designed in 1945 by engineer Éric Jaulmes remained in production until 1961, and was available in two versions: the D45 from Motobécane and the C45 from Motoconfort.

This isn’t the first time that Jean-Claude Amilhat, Igor Biétry and Thierry Dubois have done something crazy. In 2018, they took «Josephine» (the Renault Juvaquatre) for a spin at the Linas Montlhéry racetrack to commemorate the record that had been set 80 years earlier by Renault. On the back of this adventure, ideas then started to come thick and fast and the three friends set off with «Félicie», a 1938 Peugeot 202 for a six-day tour of France covering 3300 km.

“Three guys on their tobecs” – following in the wake of Georges Monneret and his sons – is in the same vein. On the walkway between Hall 1 and Hall 2, the three friends will be exhibiting their motorcycles and talking about their adventure at the press evening on Tuesday 4, and then to visitors on Wednesday 5, setting off at 10.00 pm, from Rétromobile.