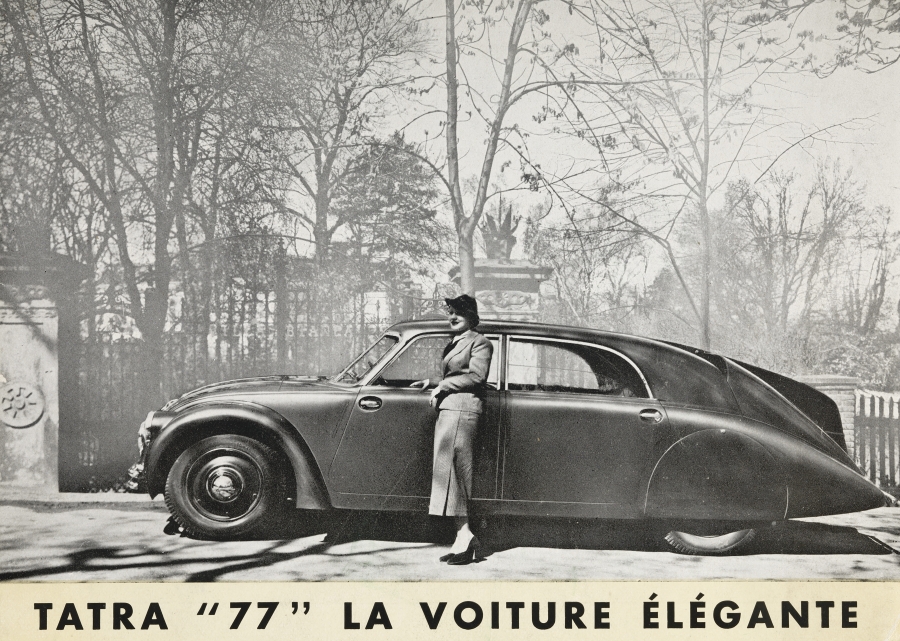 Tatra: A small manufacturer and a great history

When mention is made of air-cooled rear engine vehicles, people immediately think of Volkswagen or Porsche. And yet… the forerunner of this design was not German but Czech!

Audacity, originality, know-how and elitism – those are the characteristics that make up Tatra’s ethos, a vehicle manufacturer which, despite two world wars and radical political change, has always succeeded in standing out from the rest through its pursuit of streamlined design and use of avant-garde technology. Hans Ledvinka was the engineer who left his mark on Tatra’s history with his revolutionary technical ideas – such as the rigid backbone tube, independent suspension, air-cooled engines and aerodynamic bodywork.

Tatra placed the emphasis on a high level of functional originality completely devoid of whimsy: «Nothing is gratuitous, function alone creates the form».

In 1897, Nesselsdorf (which would later become Tatra in 1920) unveiled its first car – the Präsident automobile, followed by the Meteor, which reached speeds of 82 km/h in 1899 – extraordinary for the era. Very quickly, the make became renowned for its high quality builds and the reliability of its vehicles.

In 1933, the Tatra V570 was born – a small aerodynamic car with an air-cooled rear-mounted engine: a true revolution. The aim was to create a cheap people’s car. However, Tatra’s managers decided that the V570’s ultramodern design would be used to develop the Tatra 77 – the world’s first serially produced aerodynamic limousine-bodied car in 1934.

The design of both the V570 and the Tatra 77 greatly inspired Ferdinand Porsche who went on to produce the Volkswagen Beetle and a number of post-war Porsches.

In 1948, Tatra’s production was significantly reduced by the directives of a new political regime that was highly influenced by the USSR. The automobile production department was reduced to supplying the Communist Party with limousines, while lorry production continued to expand. Thanks to their legendary sturdiness, their 4, 6 or 8 wheel-drive transmission systems and their ability to navigate extremely undulating terrain, Tatra’s lorries contributed to the make’s success with six Paris Dakar victories in the auto-camion category, all with rally raid driver Karel Loprais at the wheel.

Tatra’s automotive history ended in 1999 with the production of the extremely exotic and highly rare Tatra 700, only 65 of which were ever built. The Tatra make still exists, but it builds lorries exclusively.

For its 45th edition, Rétromobile will be showcasing this great technological adventure in partnership with the Kopřivnice Tatra Museum, the Brittany-based Manoir de l’Automobile and the Ecorra workshop (Czech Tatra specialist).

A number of exceptional Tatra vehicles will be on loan from enthusiastic Czech collectors. At the exhibit, photographer Vladimír Cettl will shed light onto Tatra’s forgotten past with an exhibition of previously unseen photographs.

The Zlín Museum will provide images and films retracing some of the highlights of this exceptional car manufacturer’s history, and will enable visitors to find out more about the deeply moving adventure of Jiří Hanzelka and Miroslav Zikmund – two Czech students who set off to circumnavigate the world behind the wheel of a 1947 Tatra 87.

For four years, the two young adventurers shot films, wrote articles for newspapers and magazines and most importantly, kept up a journal that was broadcast over Czech radio. They brought their curiosity to everything that they discovered. They set out to describe the ways in which the people that they met lived.

In their absence, Czechoslovakia’s political regime was shifting. On 25 February 1948, President Beneš surrendered power to the Communists under Stalin’s influence. The new totalitarian government ordered the two young adventurers to return. Thanks to their financial autonomy, they were able to refuse and decided to continue their travels.

Suddenly, their trip took on its true meaning: they realised that they could provide Czech people with a rare chance for vicarious escape to the outside world. Henceforth, they were the eyes of the world for Czechoslovakia.

When they returned in 1950, Hanzelka and Zikmund found their country right in the midst of a political war. Under the new regime’s extremely tight control, they published a complete account of their travels in several books and screened their films. Their media success afforded them protection.

In 1960, the two adventurers were able to continue with their odyssey. They criss-crossed the Asian continent and the huge expanse of the Soviet Union with its numerous cultural riches. When they returned to Czechoslovakia in 1964, they were kept under tight surveillance – their accounts of what they had seen contradicted the propaganda of the era. In 1968, Jiří and Miroslav protested violently against the 500,000 soldiers who invaded their country under the Warsaw Pact. They were immediately banned from leaving the country, from publishing any material and from broadcasting over the radio.

Throughout their lives, Jiří Hanzelka and Miroslav Zikmund continued to defend people’s right to freedom.

Today, the Zlín Museum looks after these fantastic archives.