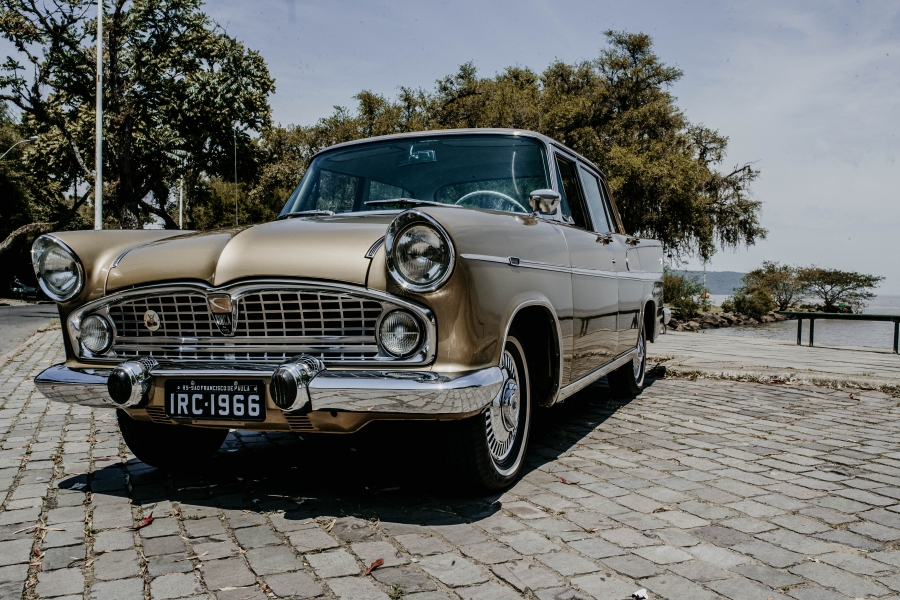 Rétromobile and the vedette club present a car never before seen in France: A 1966 simca do brasil rallye-emisul

The final evolution of the French SIMCA V8 Chambord, the Simca Do Brasil was powered by a 140 hp pushrod engine and featured a six-speed gearbox.

The very first French “Vedettes” in 1949 were manufactured by Ford SAF and had 60 hp side valve V8 engines. One of the distinctive features of these cars was their highly recognisable «round back» bodywork. In 1954, Simca purchased Ford France. Four years later, the company founded SIMCA DO BRASIL in São Bernardo do Campo. Initially just a unit where parts shipped from France were assembled, under the direction of French engineer Jacques Pasteur, the plant eventually started producing vehicles locally and making changes to existing models, both in terms of their bodywork and their mechanics right up until 1968 when the range was discontinued.
The superb 1966 6M Simca Rallye EmiSul to be shown at the 2020 Rétromobile is a golden «Goldfinger» colour – most likely as a reference to the James Bond film. It’s an extremely rare model: only 597 were ever built in 1966. The 6M gearbox was optional on the Rallye model. Relatively few cars had them and it’s impossible to say how many still exist. This gearbox offers drivers the option of three «long» speeds for road driving and three «short» speeds for city or mountain driving. An electric contactor on the dashboard switches between the two gear ranges.

The “Aquilon” engine variant was entirely Brazil-built. Having adapted the transistorised ignition system, engineer Jacques Pasteur took over design of the ARDUN kit developed by Zora Arkus-Duntov, a Belgian-born American engineer of Russian origin. This kit transformed the Ford Aquilon side valve engine into an overhead valve engine boasting a significantly more powerful, more modern hemispherical combustion chamber. Significant improvements in performance and a better cooling system boosted the old Aquilon engines up from 60 hp to 130 hp on the Chambord models, and even up to 140 hp for the Rallyes and the Présidences! Nowadays, only two remaining EmiSuls are listed..

Carlos, the current owner, purchased this jewel of a car in 2005 from a certain Mr Flavio who had owned it since 1978. He immediately set about restoring it:

“First of all, the engine was meticulously rebuilt and the bodywork was repaired and repainted with its original “metallic Goldfinger” colour.”

But in 2008, he finally abandoned the project. The interior was incomplete and the six-speed gearbox had still not been refitted. The car was left dormant in a museum until March 2019.

“Today, I am absolutely delighted to see it completely restored and prepared for Rétromobile 2020. And once the exhibition is over, I fully intend to travel all over France in the Rallye Emisul representing the work of the French Vedette Club”.