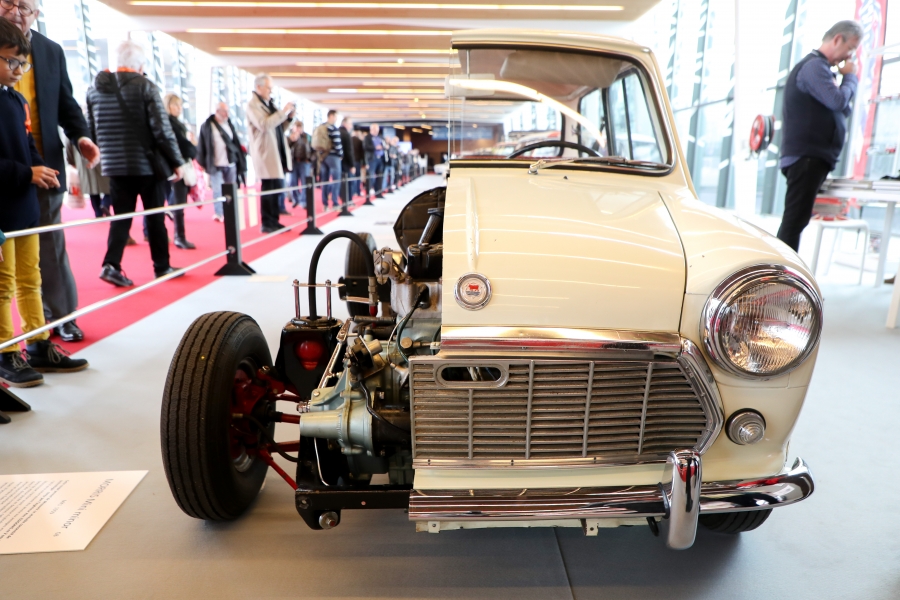 The exhibitions and animations 2019 have seduced you!

A look back on the exhibitions and events that our dear visitors enjoyed most during this 44th edition of Retromobile.

This exhibition was the result of 10 years of negotiations. In 42 years of Retromobile, this was the first time that an exhibition attracted public and media attention so spectacularly a week before the show. Something which can be attributed – at least in part – to the four days it took to get the monster to Paris. One word is enough to sum up the interest in – and the dimensions of – the Giant of the Desert at the show: ENORMOUS!

An equivalent media budget of €105,000 (what would have had to be invested in social network media purchases for the same audience).

60 years of the Mini – a topic covered the world over. Sponsor: Transports Prévost

24 Minis, from the first to the last, with contributions from a number of individual collectors and two major UK museums.

An exhibition which proved extremely popular with both visitors and the media.  Atmosphere: high levels of enthusiasm. Both popular and historical.

Icons of the earliest stages of locomotion

The Compiègne Museum exhibited a number of extremely rare pre-1900 cars – icons of the earliest stages of locomotion. The Teuf Teuf club staged a number of dynamic demonstrations in front of hall 1.

This event was extremely important – it provided visitors with an opportunity to experience the trip of a lifetime in a 100-year old car.

Both young and old visitors alike have been attending this event for several years now.

Keen historical and technical interest. The curators of the Saumur Tank Museum and the national union of collectors of military vehicles (UNIVEM) presented two of the most iconic tanks of the Second World War. A rare German Panzer IVtank and aUS Sherman tank.

The UNIVEM arranged tours of the inside of the Sherman tank at its stand while the Tank Museum staged spectacular dynamic demonstrations outside involving a 1960 US reconnaissance tank.

Every year, the world-renowned Beaulieu National Motor Museum presents an exceptional car which contributes to the show's success. The extremely rare and fabulous single-seater BRM type 15 proved tremendously successful. The Beaulieu National Motor Museum still offers its services as a technical platform that helps organise transport from the UK and locate certain cars for other events at the show.

This year, an event was staged right at the entrance to the artists' gallery

Il n’en restera qu’une (only one will remain) An astounding work of art.

An antiquated 2CV, held prisoner inside a mousetrap. The bait? A can of petrol. The piece is a futuristic tale told in the past, or how the very last car with a combustion engine was caught in 2085.

A powerful image that left quite an impression on visitors and captured the attention of contemporary art lovers.

Retromobile is one of the partners of the Vintage Revival Montlhery event. Held on 11 & 12 May 2019, it sees car enthusiasts heading to the legendary Linas Montlhéry racetrack for a top European event that features pre-war cars and motorcycles.

The largest collection of existing Bedelia cycle cars – from the ambulance version to the competition model – were exhibited over a 250 m² area in hall 3/1. This unusual gathering was used by the media for a number of features which were broadcast week before the show.

The only exhibition of its kind which tells the story of a major French motorcycle manufacturer which played a part in founding one of the world's largest aeronautic sector companies.

Visitors got to meet many representatives from the Gnome et Rhône motorcycle club, as well as SAFRAN engineers.