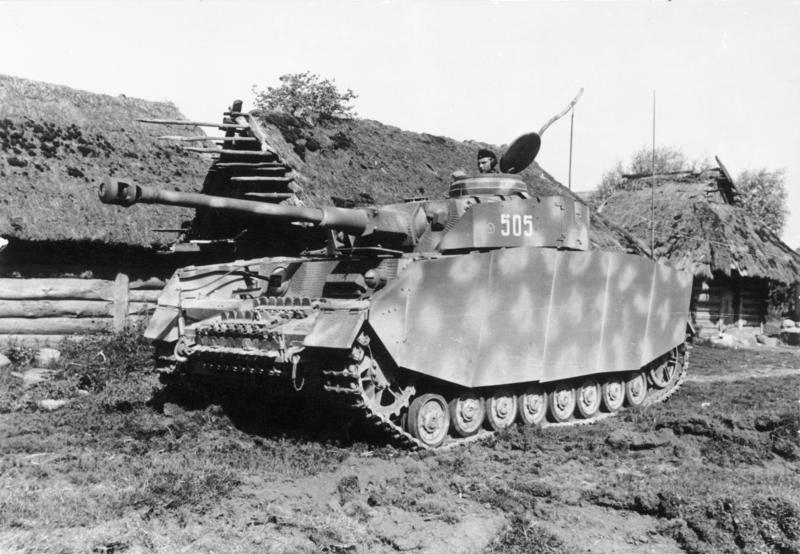 The Tank Museum and the National Union of Collectors of military vehicles (UNIVEM) present the Panzer IV and the Sherman !

The Saumur Tank Museum has one of the largest collections of First World War armoured vehicles in the world. This institution is not only a very important part of France's technical heritage: it also completely fulfils its mission as a memorial to France in combat, which forms part of our history. The Saumur Tank Museum will be making a return to the Show to celebrate the 44th edition of Rétromobile. In partnership with the national union of collectors of military vehicles (Univem), they will be showcasing two iconic German and American tank models.

The Panzer IV and Sherman went head-to-head in numerous battles.

The Panzer IV is all about hardiness, reliability and high performance. Commissioned by the German army, this tank is considered one of the Second World War's best armoured vehicles. With its low body and 75 mm gun, it constituted a fearful weapon. It was capable of destroying another armoured vehicle, accurately piercing through 10 cm of shielding. Weighing less than 30 tonnes, it was an extremely mobile tank. And one of its distinctive features was the double-layered shielding of its turret and sides. The Panzer IV survived the war! 20 years later, it was still being used by several armies.

The Sherman was the most famous tank of the Second World War. Widely used by the Western allies, it remains a symbol of victory and liberation. Numerous variants were produced, including an amphibious version. From 1942 onwards, it was involved in most of the war's offensives. Mass-produced, Sherman tanks were simple and functional. The Sherman Firefly could get the better of all the enemy tanks it faced. It remained in operation in numerous countries until the 1970s.

A little history... This Panzer IV was built and delivered at the end of the Second World War.
It underwent no baptism of fire and was immediately recovered by the French army, so the Tank Museum was able to get hold of it several years later in outstanding condition.

SPECIFICATIONS OF THE PANZER IV

After 17 years being rebuilt, this tank is once again in perfect working condition. It was completely taken apart, and each and every component was meticulously restored. The huge engine – adapted from an aircraft engine – was refurbished.

A little history... This Sherman tank which rolled off the production line of Chrysler’s Arsenal Tank Department in Detroit, Michigan in January 1943 bears the number 3018365. It was delivered to the French army in September 1943. It took part in numerous offensives, including the Provence landings of August 1944, and was never hit. Once the war was over, it remained in active service until 1965. Tanks were usually scrapped or used as targets for testing new projectiles. As luck would have it, this Sherman was stored at the Bourges base and was given to the UNIVEM association in 1993. Unable to unearth this tank's war name, the association's members decided to name it “General Lafayette”. Nicknamed the "Hero of two worlds", this historical figure from the end of the 18th century was a great French officer who was later given honorary American citizenship.

SPECIFICATIONS OF THE 1942 M4-A4 SHERMAN TANK

This tracked armoured fighting vehicle was manufactured by the Cadillac division of General Motors in the 1960s for reconnaissance missions on uneven ground. Made of aluminium, it was light, manoeuvrable and extremely fast. Completely watertight, the M114 was amphibious and could be deployed by parachute. It was used in the Vietnam War, as well as in a number of other combat operations.
Visitors will get to help start and drive this surprising armoured fighting vehicle.