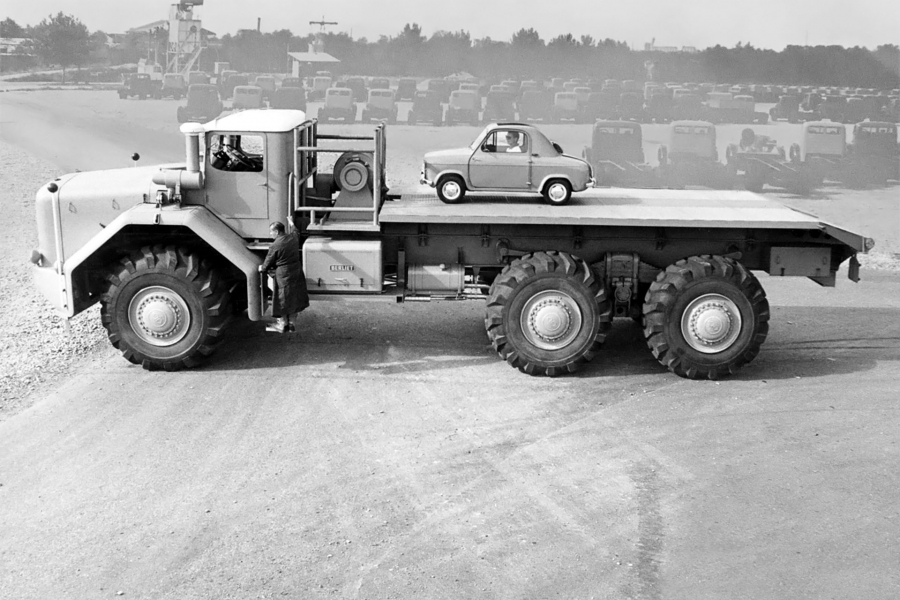 Retromobile 2019 : In the footsteps of a giant

For the past 43 years, Retromobile has been showcasing historical highlights for its visitors, retracing the history of locomotion. Clubs, private collectors, foundations, museums and vehicle manufacturers have taken part in their droves.

The 44th edition will be paying tribute to a giant. Never in the entire history of Retromobile has such a great or imposing vehicle been seen. This is the result of a colossal, titanic undertaking.

The Berliet Fondation and Retromobile, in partnership with Michelin and Transports Premat, present

The Berliet Foundation has one of the largest collections of utility vehicles in the world, from the start of the 20th century to present day. This institution is not only a very important part of France's technical heritage: it also completely fulfils its mission as a memorial to industrial France, which forms part of our history.

The Berliet T100: It is a steel colossus: 5 m high, 5 m wide, 15 m long with a weight of 50 tonnes. It came about 61 years ago as a result of the determination of a highly motivated team led by an extremely focused man: Paul Berliet.

For such a titanic project, everything had to be designed and built on a LARGE scale. Adjectives such as GIGANTIC, ENORMOUS and FANTASTIC perfectly summarise this major human and technical endeavour.

Somewhat symbolically, a gestation period of only nine months was required between the first sketches and the unveiling of the T100 at the 1957 Motor Show at Porte de Versailles.

The T100’s first mission was in Algeria, working for a mining company based in Hassi-Messaoud. Berliet designed the giant truck for large open spaces. It was mainly used over immense desert plains, to transport heavy equipment for oil exploration projects.

In the 1950s, road convoy operations in desert regions were carried out by trucks which ran on tracks made and maintained by earthmoving machinery.  But unfortunately these roads were constantly having to be rebuilt – sandstorms would wipe them out on a regular basis.

The French Manufacturer of tyres Michelin got involved in this major endeavour by designing – especially for the giant Berliet – a low-pressure tyre with non-standard dimensions: 37,5/33 XR, 2.2 m diameter, 1 m width for vehicles weighing a tonne!  Thanks to this technical feat, the T100 was able to drive straight ahead, slicing through sand dunes as would a Transatlantic ocean liner on a direct course.

The T100 meant that the number and duration of journeys between each drilling location could be reduced, while carrying indivisible cargoes of more than 50 tonnes.

And what's more… it looked good!

Of the four T100s designed by Berliet, only the two which stayed in the desert have been preserved

Once they had completed their missions, the T100-01 and -02 were stored in a facility for decommissioned equipment.

In 1981, following discussions with Paul Berliet, rubber-stamped by the Algerian authorities, Berliet’s Algerian Delegation decided to repatriate the T100-02. Because of the extremely dry Algerian climate in this region, this giant of a truck, which had spent ten years waiting on burning sand, had been well preserved.

Once again, Michelin's expertise was called upon: for the T100 to run again, new tyres were needed. The major Clermont Ferrand-based company quickly provided the precious tyres, without which the T-100 would have been condemned to stay in the desert.

A few months later, the giant Berliet, with new tyres and a fresh coat of paint, took to the eastern roads and made its way up towards the Tunisian coast, then the Mediterranean and Marseilles. Its long journey ended in the Lyon region in January 1981 at the manufacture’s site… where it had been born! 61 years ago today.

There are new adventures ahead for the giant Berliet. It will be shown to the general public by the Berliet Foundation for the five days of the Retromobile show, from 6 to 10 February 2019 at the Porte de Versailles exhibition centre.

One fundamental question had to be answered: how to get the giant Berliet from Lyon to Paris, and who should be entrusted with this major operation?

“For the Berliet T100… I'm prepared to do anything

The 40 m long convoy was escorted by several accompanying cars and motorcycles, with the full width of 500 km of local roads being occupied – a true spectacle. Once again, the Berliet adventure has galvanised volunteers into action…

This exhibition is a major media event focusing on a historic and impressive subject. There will be much media coverage throughout the show of the convoy operation, the T-100’s arrival at the Exhibition Centre and its unveiling.