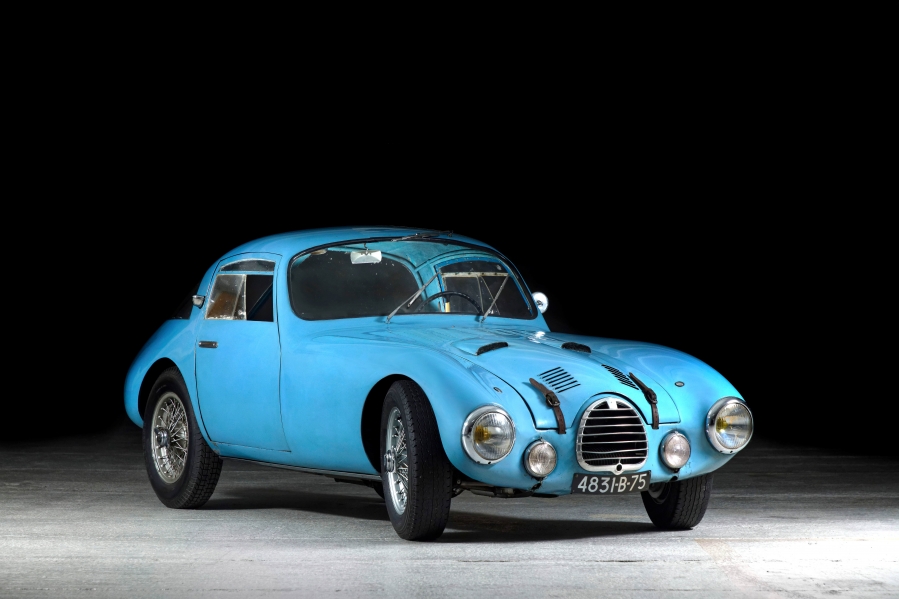 Artcurial Motorcars returns to the Salon Retromobile for a sale that promises to be exceptional. Fangio’s Gordini, the Bandini Collection, also the Lempereur and Bruno Lafourcade Collections as well as the Peugeot 908 driven by Bourdais. A line-up set to tempt collectors who come from around the world to attend the official auction sale held at this unique show.

PARIS – The Artcurial Motorcars team is looking forward to welcoming collectors and enthusiasts on its return to the Salon Retromobile, following the cancellation of the 2021 edition due to the pandemic.

Competition cars will take centre stage once again in the 2022 sale with the Gordini Type 18S driven by Fangio in the 1950 Le Mans 24 Hours presented alongside Sébastien Bourdais’s Peugeot 908 that won the Zhuhaï 6 Hours. Also starring will be the Bandini collection of nine competition cars, paying tribute to the creator of this special Italian marque. Rally car enthusiasts will be drawn to the collection of nineteen vehicles from the estate of Beaudoin Lempereur. Finally, the Bruno Lafourcade collection comprising four Bugatti and two Alfa Romeo provides sheds light on the life of this renowned architect with a passion for automobiles.

Artcurial Motorcars is proud to present the Gordini Type 18S that was driven by Juan Manuel Fangio and José Froilán González in the 1950 Le Mans 24 Hours.

There were only two examples of the Gordini Type 18S built, with a highly aerodynamic body made entirely of duralumin. Of the 33 different chassis built by Gordini, all types together, this #20S berlinetta is the only one to survive in such exceptionally original condition. It has retained the 1950 upholstery from Fangio’s era and is equipped with the only Gordini compressor engine still in existence. This Gordini berlinetta still bears the evidence of its history in competition, as raced by Juan-Manuel Fangio and also its participation in the Rome-Liège-Rome race in 1951. In exceptionally original condition, this car has the attributes required of a great work of art : rarity and provenance.

In 2005, Peugeot announced its intention to compete in the Le Mans 24 Hour race in a turbocharged V12 diesel-engined car. With the new 908 presented for the 2011 season, Peugeot moved from a V12 to a V8 engine. It was in this car, chassis 07, that Sébastien Bourdais and Anthony Davidson won the Zhuhaï 6 Hours, allowing Peugeot to finish the 2011 season with a sixth victory in seven races. No one suspected that this would be the final victory of this exciting period, and the last appearance of a 908 in competition.

The 908-07 is considered to be the ultimate evolution of the 908, featuring every technical development available to the model in 2011. The car in the sale was completely overhauled by Peugeot Sport and delivered to the current owner in October 2017. Since then it has only been started up at demonstrations. Just as Peugeot has announced its return to endurance racing by unveiling its new V6 hybrid-engined 9X8, this 908 HDI represents a glorious period of endurance racing and the best in early 21st century French technology.

The Bandini Collection from the marque founder’s nephew

No less than nine extraordinary cars from the Italian marque Bandini will be presented in the sale! This very special collection has been assembled by Dino Bandini in tribute to his uncle Ilario, who founded the marque in 1946. The custodian of this marque today, Dino is the author of a comprehensive book on Bandini, the company’s history and a complete register of the 75 automobiles built by his uncle. Based in Forli in Emilia-Romagna, the marque folded with the death of its founder in 1992. Since that time, his nephew has worked tirelessly to assemble the greatest number of cars built by his uncle, some with exceptional racing provenance.

Coming from the Bandini museum, the cars with notable racing provenance in the sale include:

The Bruno Lafourcade Collection, a collector with a passion

We only need to talk to François Chevallier, one of his oldest friends, to understand that Bruno Lafourcade was an exceptional man. He was an architect, with many highly innovative projects to his name, and an aesthete with a wholehearted passion for cars. He redesigned his final property around the garage that housed his collection. A great admirer of autommobiles built by Ettore Bugatti, he spent a lot of time at the wheel of these sports and grand touring models. He was a very active participant in all kind of rallies and events and always involved his wife Dominique and son Alexandre in these automotive adventures. He like to share his passion, spending his weekends in his studio conversing with François Chevallier and Laurent Rondoni or driving with friends.

There are four Bugatti presented in the sale including a 35C with an impressive historic racing provenance, a totally original 44 Faux Cabriolet bodied by Labourdette, a Type 13 and a 37 ‘Petit-Coupé’ reconstruction. There are also two exceptional and extremely rare Alfa Romeo, an SZ Coda Tonda and a Giulietta Sprint Veloce Alleggerita.

There will be 19 rally cars on offer in the Retromobile sale coming from the estate of Beaudoin Lempereur. Lempereur was a well-known figure at Belgian circuits and rallies, for his talents as a driver and also his mechanical expertise, supplying the highest quality spare parts. Passionate about cars from a very young age, he collected the rally cars that had inspired him, including models that he drove in both regularity and competitive events. These cars, which have all been carefully preserved in his garage include a fantastic group of rally Fords, with a Lotus Cortina, a Sierra RS Cosworth and a Ford RS200.

Acquired by the vendor’s grandfather in 1925, this Hispano H6B has remained with the family ever since. As often happened with cars of this vintage, the coachwork was dismantled in period in order to give the car a new, more up-to-date body. However, the Second World War put a halt to this project and the complete H6B rolling chassis was subsequently tucked away, conserved in optimal conditions. Placed on blocks in the family property, all mechanical elements were protected with paraffin and the engine crank handle was turned regularly.

This H6B was discovered during Artcurial Motorcars’ very popular ‘tour de France’ last spring, providing the specialists with an emotional scene when unearthing this sleeping beauty.

« « You can imagine how emotional it was to open the doors of this garage in Monaco to find these four Ferrari Supercars, models we have all dreamed about! When we discovered they were such lowmileage, one-owner cars, we realised we were looking at a treasure that is incredibly sought after and almost impossible to find on the market today » Matthieu Lamoure, Managing Director, Artcurial Motorcars

Maître Etienne Léandri, a defence lawyer at the Monaco Bar and State Councillor had a lifelong passion for the Ferrari marque. Known as “The Ferrari lawyer”, he maintained a friendly relationship with Gabriel Cavallari and, when an exclusive new model was launched, he was given priority to buy one. Over the decades, he put together an exceptional collection of eight sports automobiles, bringing together a stunning group of Supercars built by Maranello over a period of more than thirty years.

Maître Léandri enjoyed using his cars as well as contemplating them. He would often go down to his garages, situated beneath his office, simply to look at them and admire them. Securely stored and protected from the harsh effects of sunlight, they sat with their batteries permanently on charge, ready to go. These machines are in unusually well conserved condition, having only been taken out on rare occasions, and never in the rain. Consequently they are all very low mileage : 13 284 km for the F40, 1318 km for the F50, 4760 km for the Enzo, 952 km for the La Ferrari.

A lifelong marque enthusiast, our collector ordered his F40 (and all subsequent cars) from the importer Charles Pozzi at Levallois. This model was delivered in July 1989 and, as with all F40s, was liveried in “Rosso Corsa FER 300/9” with matching bucket seats. This colour combination was religiously adhered to when ordering his other Supercars.

Used meticulously, this F40 has covered just 13 284 km and is in rare condition. Stored in optimal conditions throughout its life, protected from light and kept at a constant temperature, the car has never been used in the rain and has only been driven by one careful owner. This F40 must be one of the best-preserved examples in existence.

This Ferrari F50 was delivered new in 1996, and has covered just 1 318 km today. Apart from its original dashboard, this car still belongs to the pre-digital era, as can be seen from the classic steering wheel and traditional gear lever set in its steel grille specific to the Maranello marque.

The Enzo has a mileage of just 4760 km from new and is presented in exceptionally well-preserved condition, with the shine of a new machine. It has benefitted from extremely careful use and its impressive presentation enhances the Enzo’s technical brilliance. The essential “Rosso Corsa DS322” livery was selected in order to retain the same colours throughout the collection.

952 km : this is the mileage covered since leaving the factory. Delivered in December 2013, the car is practically new. With such a great passion for this Italian marque, it was inevitable that Maître Etienne Léandri would include the model known as the “Nuova Enzo” in his Monagesque garage, one of just 499 examples of this particularly exclusive machine. Equipped with hybrid technology, it represents the very best of the marque’s expertise, the result of experience gained in F1 and an unrivalled pedigree in road-going cars

Alongside these four exceptional Supercars is a Ferrari 599 GTO F1 with a mileage of 3390 km, a Ferrari 458 Italie with 6802 km, a rare manual Lamborghini Murciélago with 10905 km on the clock and a Fiat 595 Abarth Ferrari Dealers Edition, all acquired new by Maître Etienne Léandri.

« The Salon Rétromobile is the biggest and best-known collectors’ car show in the world. Our official sale at this event represents the best opportunity for a collector to sell his car at the highest price, in a very dynamic market, as we witnessed in our recent sale on 24 October» Matthieu Lamoure, Managing Director, Artcurial Motorcars