Millet, one of the world's first motorcycles

On 22 December 1889, a diminutive man with grand ideas unveiled what was one of the modern motorcycle's ancestors… and then shortly after that, one of the world's first motorcycles (after the "Perreaux" motorcycle).

It was the end of the 18th century in France when Félix Théodore Millet decided to create a small engine-driven vehicle – long before anyone had even heard of the first motorcar (Cugnot’s famous Fardier). The 1880s saw a number of minor revolutions – including the development of Karl Benz’s first motorcar.

This was to have repercussions. When confronted with this curious vehicle that was somewhere between a tank and a bicycle, Mr Millet decided to fit a five-cylinder rotary radial engine onto his tricycle. He built the engine himself. Its distinctive feature was that it had a fixed crankshaft. In other words, the engine rotated around it. Most First World War aircraft would feature such engines – the design would even be used by some of the world's leading aircraft builders.

Full of ideas and overflowing with genius, Mr Millet fine-tuned his concept, transitioning from his automobile tricycle to a motorised bicycle in 1895. A forerunner of his time, his motorcycle was almost on a par with contemporary motorcycles. He lavished accessories on it. With his avant-garde approach, he gave it headlights, twist handgrips, a suspension system, a battery and ignition system, a sheet metal shell, a central stand, a single rear shock absorber and even tyres! All of this would not become standard until between 1930 and 1980.

Mr. Millet put the finishing touches on his 2000 cm³ multi-cylinder machine in 1897 and in the same year set about trying to have it mass-produced.

Unfortunately, following his participation in the Paris-Bordeaux-Paris race where he failed to get past Orléans, no more was ever heard of dear Félix Théodore Millet. 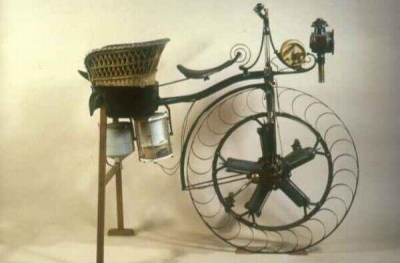 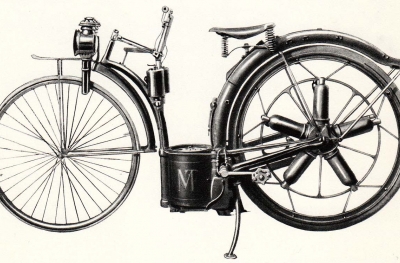