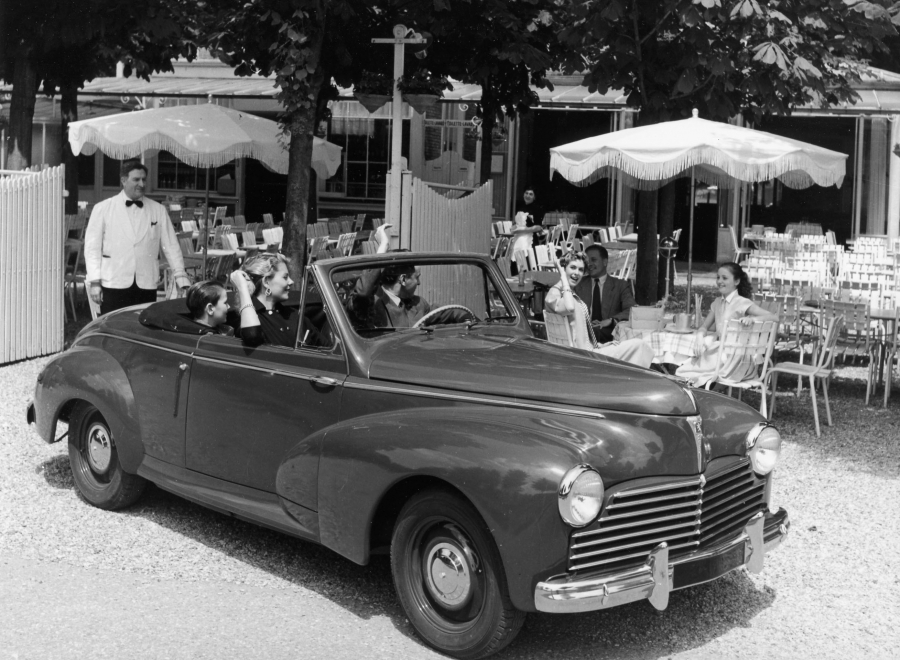 This year, Peugeot is celebrating the birthdays of two of its leading post-war tourers: the 203 and the 504.

In Peugeot's history, some models have considerably more prominence than others. This applies to the 203 on which the make staked its rebirth at the end of the Second World War.

Work began on this two-section 4-door saloon which could carry up to 6 people during the dark days of the Occupation. Although the first sketches were drawn at the start of 1944, the specifications for the future 203 were not actually formalised until April 1945. Its curves featuring headlights that were semi-incorporated into the pontoon fenders drew inspiration from American guns. The technology behind it was decidedly modern. The monocoque body was self-supporting, suspended at the front by independent wheels and – a first at the time – coil springs at the rear

Another major innovation was its engine: its 4-cylinder 1.3 L 46 hp pushrod engine featured removable sleeves and aluminium cylinder heads with overhead valves. The 203 was presented to dealers and the press at the Palais de Chaillot during the October 1947 Paris Motor Show. It had to wait another year for it to be granted a road permit and made officially available for purchase.

The first ones were delivered in January 1949. Drawing on its reputation as a sturdy and reliable car, the 203 shown in adverts as the "economic or luxury car" proved tremendously successful. A wide range of tourer models were launched in quick succession – saloon, estate, cabriolet and coupé – as well as utility versions with leaf spring rear suspension and an extended wheelbase. Not even the arrival of the 403 could put an end to the 203’s career – production of which finally ceased in 1960 after more than 685,000 cars had been built. Eight years later, Peugeot took veered off in a whole new direction with its 504. This mid-size road car arrived just as Peugeot had entered into an agreement with the Régie Nationale des Usines Renault to pool their research and vehicle testing centres and cooperate on developing new models together. The 504 ushered in a new aesthetic era featuring elegant, classic lines, designed, as it was by Italian firm Pininfarina. Pininfarina also behind the coupé and cabriolet versions which were unveiled a year later

A fast, large tourer, the 504 was powered by an upgraded version of the carburated four-cylinder engine which powered the 404, or by an optional fuel-injection version. It featured a three-speed ZF gearbox as an upgrade. Its modern technology was what made the 504 stand out: four independent wheels, four assisted disc brakes and headrests integrated into the backs of the front seats. Voted Car of the Year in 1969, the 504 enjoyed unprecedented commercial success, which continued through to 2005 with the launch of the pick-up version in Africa. The legendary sturdiness of both the saloon and coupé versions earned it a good crop of victories in African rally races.

At Rétromobile, the "5" family is once again being honoured by the presence of a Type 5 – one of ancestors of the Franche-Comté-based company that was founded in 1891.