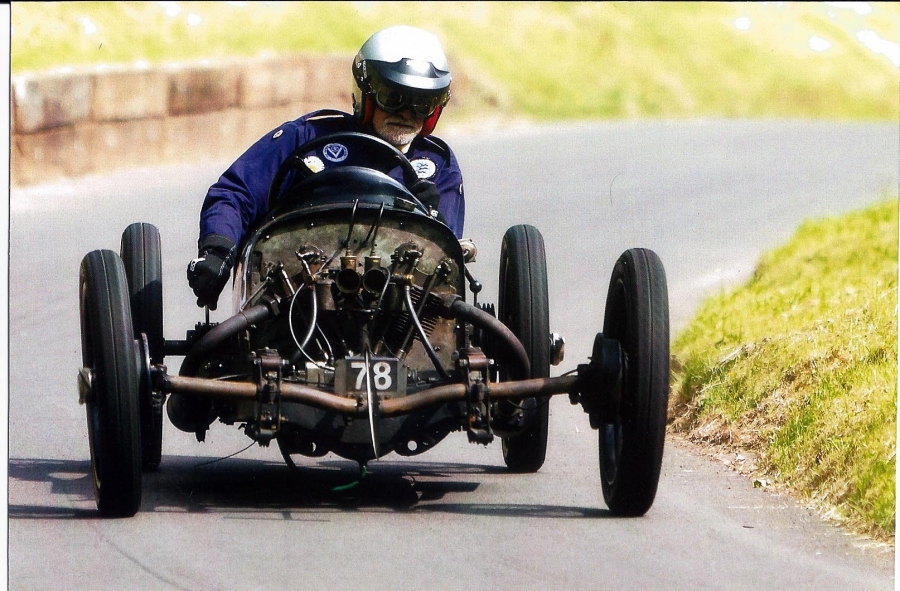 Charles brought Rupert into the Daimler plant as an engineer, and father and son competed together in a number of races, including the famous Shelsley Walsh and Prescott Speed Hill Climbs, events which whipped up his enthusiasm for motorsports.

In 1930, Rupert competed in his first Monte Carlo race with his father.

At the end of 1930, Rupert purchased a wreck of an old GN (Godfrey & Nash) cyclecar, and between 1930 and 1931, built his own race vehicle out of it so he could take part in various Hill Climb events across the UK.

These included the famous Shelsley Walsh Speed Hill Climb, for example, a British motorsport event that was first run in 1905 in a village in Worcestershire over a standardised distance of 1000 yards, as well as the Prescott Speed Hill Climb, which is still a major UK motorsports competition.

The "Special" epithet is given to a category of vehicles which compete in UK hill climbs, organised by amateurs, many of whom have put together their own machines from existing parts. They are named after their creator, followed by the word "special".

The vehicle is photographed in front of the DAIMLER plant where we think it was built.

It's a two-seater racing cyclecar with a GN 1000cc semi-pushrod engine, and a GN front powertrain horizontally compressed to make the vehicle as low as possible. The transmission system was also built by GN. It features 3 axle chain gears without a differential and no reverse. Rear brakes only. It competed in the 1100cc category.

From 1931 onwards, the GN competed in its first races, but Rupert wasn't satisfied with the original engine (even though it had been converted into an overhead valve engine), and so he replaced it with a 1000cc pushrod liquid-cooled JAP engine.

Instone then graduated to an air-cooled JAP engine and the vehicle underwent 3 or 4 engine changes as he experimented with four-cylinder air- and water-cooled models. But each time, he would revert to a 1000cc KTOR type air-cooled JAP engine. The bonnet was then removed, never to be put back.

And so the name “MARTYR” was born!

In May 1936, he fitted the engine with a Swiss ZOLLER compressor and switched to alcohol-based fuel. He replaced the front powertrain with a Frazer Nash model which was wider and more stable than the original GN component.

MARTYR qualified to race and won a number of fixtures, including the Shelsley Walsh in both 1937 and 1939, beating other vehicles, including Rileys.

Rupert was not Martyr’s only driver: because of his work he couldn't compete in every single race, and so would sometimes ask his racing driver friends to take over so as to avoid losing his ranking.

In June 1946, unable to compete in the Prescott Hill Climb, he asked his friend Jack Whittingdale to drive the car in his stead. Whittingdale unfortunately lost control of the vehicle and crashed it into a tree – an accident that was immortalised and parodied by the press as the "Death of the Martyr”. The chassis was completely folded in two and the front powertrain beyond repair.

MARTYR was rebuilt in 1947-48 and was rechristened MARTYR II, finally taking to the circuits again at the end of 1948.

The vehicle was now a single-seater, still based on a GN, but only for the chassis and transmission system. The front powertrain had been modified and the bodywork overhauled with a vile-looking aluminium. The JAP KTOR engine and ZOLLER compressor remained unchanged.

In 1959, Instone retired from racing and both he and his friends started presenting the vehicle at various unofficial events.

He removed the compressor and succeeded in souping the alcohol-fuelled engine up to 1100cc – which gave it even more power. He recast and reinforced the engine casings, and modified the crankshaft.  He modified the carburettors, incorporating two SU reservoirs and two bespoke pipes into the steam tubes.

He got the compression ratio up to 13:1 and the vehicle clocked 188 km/h at Goodwood.

Then in 1961, Martyr competed in the Shelsley Walsh Speed Hill Climb, completing a first run in 39.99 seconds, and then a second in 38.64 seconds – something it had never achieved before and which was quite incredible, since thus far only Basil Davenport had posted such a time with his GN SPIDER.

It then competed in a number of events, never missing a Shelsley or Prescott Hill Climb.

In the 1990s, Martyr was sold and its new owner restored its bodywork to its original design, as well as refitting a Frazer-Nash front powertrain – turning it back into a car of the belle époque.