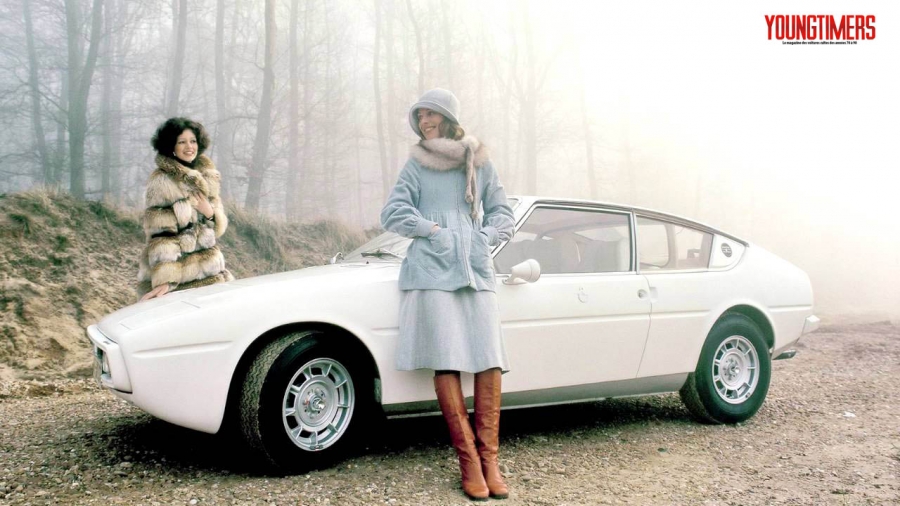 For the eighth consecutive year, the magazine Youngtimers is taking part in Rétromobile. For this 43rd edition, the monthly dedicated to the cult cars of 1970-90 puts French cars under the spotlight. But not just any: the most beautiful, the most original, the most chic and the most innovative, with this consummate art expressed by our manufacturers in transforming ready-to-wear into high fashion. Four decades of French automobiles are on the Youngtimers podium, through six models…

Appearing in 1976, the Prestige version of the CX has all the attributes of a car with a proud pedigree. A wheelbase extended by 25 cm – that of the estate car –, the vinyl roof typical of premium cars from the 1970s, with stainless steel and chrome in abundance and specific hubcaps. But you must get inside it to really appreciate the work done by Citroen. Leather upholstery at all levels, pure wool carpet, Alcantara roof lining, individual sunshades and cigar lighters, foot rest to relax the arches of the feet, wrist straps for getting out of the car, electric vehicles for everyone and air-conditioning: a real palace!

The Bagheera began its career on 14 April 1973 in front of journalists on the banks of Annecy Lake. With it, Matra recycled the good ideas of the 530: steel chassis/shell, body made of reinforced polyester and engine at the centre rear, this time positioned crosswise. The only point of disagreement between Chrysler-Simca and Philippe Guédon, the manager of Matra Automobiles: the number of passenger spaces. The first wanted four, the second wanted two… A compromise was finally found with three seats at the front! The limited "Courrèges" series appeared in September 1974 and was distinguished by its colour, its white interior trim and its acronym "AC" (for André Courrèges) on the driver door.

It was released at the end of 1996 and was generally considered to be one of the most beautiful French achievements. It was Lorenzo Ramaciotti, "design and research" manager since 1988 at Pininfarina, who designed its slender profile. This brilliant designer supervised the birth of a series of cars from Ferrari, from the 456 GT to the fantastic Enzo, as well as the 550 Maranello, 360 Modena, 612 Scaglietti and F430. The good fairies were present at the birth of this beauty, because, as well as its formal appearance, the statuesque Franco-Italian adds a sophisticated chassis and an advanced engine (V6 3.0), able to slipstream certain Swabian or Bavarian coupés of the time.

At the end of the 1980s, the gulf between the "under-equipped city car" and the "grand tourer with all comforts" was beginning to disappear. Because a chic urban clientele no longer expected to have to navigate the maze of streets in town centres in large saloons. The Supercinq Baccara provided the solution with style: bumpers in the colour of the body, aluminium "Comet" wheels, fog lights, metallic or black paint, electric pack (electric front windows + central locking by remote control), power steering, seats covered with Connolly leather in Ficelle colour, and… garment bag fixed under the rear shelf, enabling some clothing to be stored without becoming crumpled. So chic…

The well-named Avantime ("before time" in franglais), born ten years too early, never encountered the hoped-for success. In the spirit of the designers, it was an attempt to capture the well-off clientele of the large monospaces, who appreciate the high driving position and the passenger space bathed in light, but who are generally seduced by a statuesque coupé made in Germany, once the children come of age… This "coupéspace" designed by Renault (and Matra) at the dawn of the 2000s alone demonstrates the spirit of innovation and the uniqueness of the French manufacturers: SMC (Sheet Moulding Compound) bodywork, twin-stage parallel opening doors, structure and runners made of aluminium sections, etc.

In thirteen years (1987-2000), Venturi built a little legend: 643 cars produced, some examples of bravery on the road or the track and an exceptional rate of survival, thanks to its fanatics. The elegant sobriety of Gérard Godfroy's design has enabled it to grow old without showing too many wrinkles. On board, the impression remains flattering with an incredibly warm atmosphere, worthy of an English sitting room, with abundant walnut veneer and full leather trim with neat seams. An authentic GT as well as a real sports car: ultra-responsive steering, roll reduced to nothing and a very pronounced taste for clear and clean changes of support…